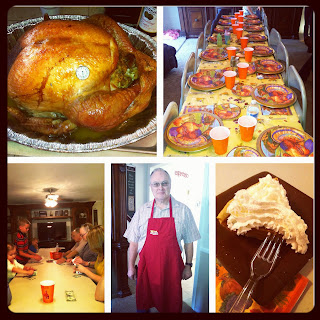 I’m not gonna lie, thankfulness has not been an easily adopted attitude of mine these past 6-8 months. In a lot of ways, this post has been painful to think about, painful to journal, painful to write, and now, well, oddly painful to publish too. I guess that’s because it’s about as real and raw and honest on here as I may ever get.

If my life was lived in semesters (and well, in many ways it is) I’d have failed the last two (Spring and Summer), and maybe be getting a C this Fall with the hopes of ending the year with a B, but not an A. I’ve been rejected, broken, denied, lost, and downright depressed. I’ve counted my losses and on a lot of days, at least from my end of it, they’ve outnumbered the wins. I’ve looked at everyone’s life around me and thought, “He or She has a lot more to be thankful for than me.” This has probably caused a lot of people to think I’m short-sighted, blind, entitled, and in the words of one former flame, “spoiled.”

Then, a few weeks ago, I was challenged by a question in a study I’m doing. It stemmed from the time in the Old Testament where God led His people to the bitter waters of Marrah. The question was, “Are there any bitter waters in your life right now?”

I laughed out loud from the sheer, undiluted, obvious irony of the answer. And I realized that MY answer, my real answer, was not something I could scribble out in the 3 notebook lines of space afforded me in my paperback study book.

This called for some serious journalling time. And so, on this Thanksgiving 2011, I’m opening that introspective journal entry up to you. You see, I decided that night that I sat down to journal that I could simply list all the things I was bitter about. But, well, that just didn’t seem very productive, and awfully morbid, more morbid than I’ve wanted to allow myself to be since the summer’s reign of emotional terror. So, I decided that with every bitter confession, I would journal how that same negative, God could use in my life (or, I could allow God to use) as a positive.

In a word, how I could be THANKFUL for the seeming blights on my 27 years of existence.

1.) Singleness. Bam. There, I said it. Didn’t think I’d be single at 27. I thought I’d be popping out babies with the rest of my collegiate comrades. But, then I realized that being single right now, yes, has its complications and shames, but it also means extra time to love on the students I adore so much, to travel the world I have so much yet to see, and extra energy to serve, in some capacity at church, in the community, wherever I guess. In other words, I own myself to a large degree, my heart is undivided, I am what the black rappers call I-N-D-E-P-E-N-D-E-N-T.

2.) But then that brings me to finances. I’m don’t own my own home, I don’t work two jobs to pay all the bills on schedule. I struggle to make ends meet with my one job and I’m stuck paying a ridiculous amount of money on my college education every month for the next ten years. It took a little thinking to pull the silver lining out of this small rain cloud, but at the end of the day, I decided I’d rather struggle financially in my late 20’s than in my late 30’s or 40’s. I suppose learning the ole credit card lesson is something we all have to learn at some point, and better now than when my responsibilities do include husband, kids, and a mortgage. Heck, maybe I’ll even become fiscally savvy at the end of this whole school-loan, credit-card payment fiasco.

3.) I said a whole hell of a lot of goodbyes recently. Best friend. Relationship. Another close friend. Then another good friend. It sucks. Like it sucks a lot. I miss my best friend every day. EVERY day. She is “my person,” as Christina Yang says of Meredith Grey on Grey’s Anatomy. But, since she has been gone, my life has opened up opportunities for me to expand my network of friends. I’ve grown closer to my roommate who helped me through the summer, closer to my colleagues at work who make my job and my extracurricular activities an absolute joy, and closer to friends in other communities like #Novemberblogfest and grad school.

4.) Overall loss of purpose. For some reason, as soul-wearying as grad school was, it occupied my time and thereby my identity. It gave me a goal to push towards, a reason for existence for at least three years. It was the next thing on my checklist that I was working towards. And when it ended, as marvelously relieving as it was, it ended. All of a sudden I reached all my life goals that I could personally work towards achieving. Which, in the end, should feel so tremendously liberating and exciting, but instead I felt imprisoned in my own finality. This has probably been the hardest pill for me to swallow. But, I’ve decided that it just needs to make me a stronger prayer warrior, a more visionary dreamer, and a compassionate Christian opportunist, if there is such a thing.

Whew. That was a lot to let out. But it was good. I welcome prayers, thoughts, questions, and just good old fashioned accountability as I seek to be THANKFUL for things I have been “bitterful” towards.

And now, on to some late night pumpkin pie.