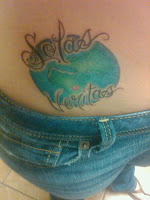 Lately, my tattoo has been stinging. Today I felt the razor slice most sharply.

Some of my students presented on the Rwandan genocide for their social justice project today. The video they showed was one I have yet to see on the topic. Like Harry Potter’s scar, my tattoo burned. It burned for the people of Rwanda, it burned for the hope that so many still need there, it burned for the beauty of the thousand green hills, it burned for the red dirt, for the crowded packed streets of Kigali with kids selling you small nuts on the side of the road as your bus drives through, it burned for the monkeys frolicking across the grasses on the campus of the National University of Rwanda (NUR), it burned for the smiles and jokes of friends on long dusty walks and bumpy car rides, it burned for a Fanta Citron, and for a dinner sitting around a small round table at the Falcon. And for croque madames. For the Copabu, the artisan and craft store. For rooms of college students sitting eager to learn and talk and share.

It burned for so many more things I couldn’t even begin to categorize on a blog because they can’t be written on keyboards and white cyber space. They’re written on my heart, and well, my right hip.

This summer will be the first one since 2008 that I won’t be traveling to the Dark Continent. Part of that is shear relief. No 3 days of traveling and 11 hour plane rides, hoping against all hope that our luggage arrives. No malaria pills that make my skin so sensitive cold water sends shooting nerve sensations up my entire arm. No cold showers every morning at 6:30 am and no tough, chewy meat. But, in a strange way, even those small discomforts seem romantically endearing to me right now.

I decided at the end of last summer that I wasn’t going back to Africa for only 3 weeks this summer. If I was going to Africa this summer, it would be for at least a year, maybe two or even three. But, the cares of this year and a thesis and teaching students and advising newspaper and ASB and working with kids at church all somehow halted the progress of being Africa-bound. And don’t even get me started on boys. Africa as a word has sent at least one eligible man running.

And I got to a point where I didn’t want to go to Africa alone. I still don’t. I would hop a plane there tomorrow if I could bring two things: another human, and my puppy. But that is not a guarantee. And so I don’t know what to do. Maybe Africa is just meant to always burn a whole in my skin. Maybe this tattoo is like a scar that just won’t quite heal. Can the salve be found here in America? Can I have a “normal” life? What is that even, and is that what I really truly want? Or will Africa only stop burning my skin if I go?