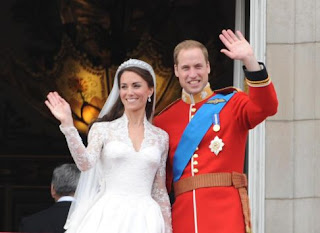 And I’m not just talking about Kate Middleton. But did you see the bishop in the gold coat? And the crazy hat lady, I mean THE crazy hat lady!

If that’s not fancy, I don’t know what is.

I know some people hemmed and hawed about how they’re just people who put their pants on one leg at a time like you and I, and at one point, over 350 years ago, England was our greatest enemy with whom we declared independence, and that yes, more important things may be occurring around the world that would merit the 2 billion people viewership (like the concurrent pre-op apprehension and execution of Osama bin Laden), but still, how often do real live fairy tales come true? How often does the commoner marry the future King? Only in Disney movies. And now, only on Channel 7.

Suffice it to say, there are many exquisite elements of this wedding. One could write novels on the Alexander McQueen dress, the royal processional, the Queen’s canary yellow couture, the hats, did I mention the hats?, the liturgy inside the historic Westminster Abbe, the groom’s regal military costume, the whispers at the altar, and of course, the double kiss.

Call me a silly girl, but this, alongside the fact that we DID fight in the trenches alongside the British in WWI AND WWII, more than merited the historian and hopeless romantic in me to devote a few hours on my Tuesday night to watch this wedding of the century with two girlfriends, cucumber sandwiches, and crumpets and tea.